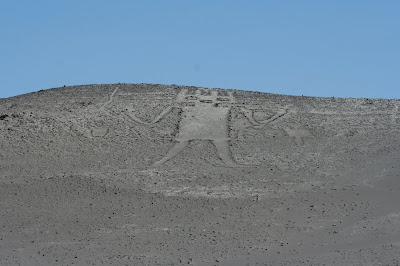 It is the most imposing geoglyph in our country and last week it suffered irreparable damage. It is the Giant of Tarapacá (Gigante de Tarapacá), located on Unitas hill, approximately 100 kilometers away from Iquique, in the Atacama Desert, in the Tarapacá Region in northern Chile. The figure, which measures 119 meters, is the largest in Chile and was presumably created by ancient indigenous cultures inhabiting the area more than 1,000 years ago.

What is most sad is that the damage was caused on Saturday, January 6 by three irresponsible tourists who drove a 4x4 vehicle on the figure’s feet and head, not heeding the signs that indicate the limit for proximity to the geoglyph and the prohibitions to damage it. Three people with Belgian passports were involved – one Chilean woman who obtained Belgian citizenship, one Chilean man born in Belgium, and one native Belgian woman – and they visited the area with the help of a Chilean. 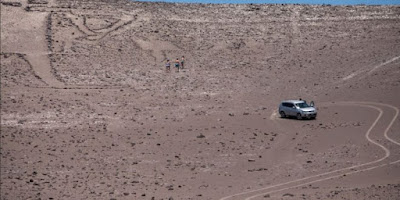 Other tourists visiting the place, outraged because of the lack of respect and culture, reported the incident on social media and the authorities acted quickly, taking the three Belgian citizens into custody at the Santiago airport as they were preparing to board their plane back to their country. After their arrest in Santiago, the tourists will be sent to Pozo Almonte, in northern Chile, to face charges for the crime of damaging a national monument, and they risk a sentence that could range from short prison, from its minimum (between 61 and 301 days) to maximum degree (between 302 and 540 days), to the payment of a fine that could go up to approximately USD $ 14,230).

Lack of protection and education

The news turned my stomach. The first thing I asked myself was: Who would do something like this and why? I hold special affection for this place, which I’ve visited several times, and which has a special symbolism for the Atacama Region. In fact, in January 2010 I was proud to be given the opportunity of leading a tourism exercise of the Pressure-State-Response model on this site as part of a Sustainable Tourism workshop organized by Universidad Arturo Prat for tour operators of the region.

The exercise was very fruitful and allowed participants to analyze the pressures (threats) faced by this cultural heritage, the state (condition) it was in, and the evidence of society’s response (actions) in the area. Although the geoglyph itself was not damaged, there was a lot of trash around it (we picked up several bags full of paper, plastic bottles, and other waste), there was no infrastructure for visitors, and there were few signs. 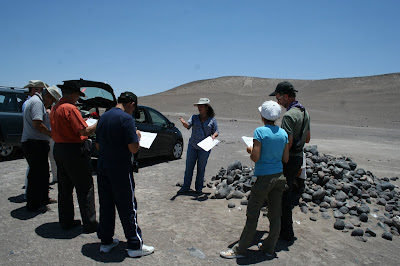 Even though the Giant has been exposed for centuries and has suffered previous damage on other occasions, none has been as serious as this. The worst part is that it is hard to understand what these people were trying to accomplish. The geoglyph was created to be admired from a distance. The truth is it cannot be seen well up close. Therefore, the only explanation is that this criminal act was exclusively meant to cause damage.

Who’s in charge of protection?

Because of its location, the direct responsibility for the protection of this important site lies in the Municipality of Huara, with a population of approximately 3,000 people. True, but we all know that in Chile all municipalities don’t have the same financial resources and, in my opinion, leaving the protection of such an important ancient heritage at the hands of a municipality shows a lack of vision.

While it’s true that the Giant of Tarapacá is a significant attraction, tourism leaves very little for the small locality of Huara, since most visitors go on day trips from Iquique, either on their own or through a tourism operator. Hence, tourism incomes mostly remain in the regional capital.

What we need to understand as a society is that any damage to our cultural and natural heritage is a damage to all Chileans. I want the people who are guilty for this to receive prison time, even if it’s short, to serve as an example and a deterrent to anyone thinking of damaging the heritage of all Chileans.

I would also like to see more actions and funds invested from the central government level on this monument, whose protection cannot be left solely at the hands of a municipality that does not have the necessary resources. It seems to me a great initiative for the ministries of Cultures and National Assets to send archaeologists to assess the damage and the possibility of repairing it, although experts indicate this is very difficult because the vehicle tracks are too deep. Anyway, I believe there is a need to evaluate how the protection of our heritage can be financed and supervised with national funds.

Unfortunately, as a result of the actions of these irresponsible tourists, future generations will never be able to see the Giant of Tarapacá in all its splendor. I hope this doesn’t happen again and that we protect our heritage the way it deserves.
Posted by Marcela Torres at 12:06 PM